Housework: who really does more? 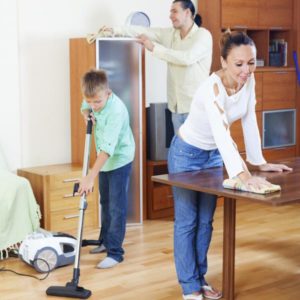 Last week I was being interviewed by a producer for the CBS Early Show. She asked, “What percentage of the housework do you do?”

“Why? I think most women probably do more, don’t you think?”

I busted out laughing.

She had to wait while I got all of the chuckles out of my system. Then I said, “I’m happy that he does any housework at all, but he definitely doesn’t do 70 percent of it.”

Later that day, I asked my husband, “Do you really think you do 70 percent of the housework? Or were you just saying that because you wanted to look good on TV?”

“How do you know I said that?”

“The producer told me. Do you?”

“Yee-ah,” he said slowly, bracing for a fight. Fortunately for him, I wasn’t angry at all. I found the difference in perspective amusing.

“Do you even know what I do around here?”

“You put the clothes away?”

“How about dealing with the mail? Paying the bills? Clipping the coupons? Buying the groceries? Doing our accounting? Taking Kaarina to and from school most days of the week? Cooking 90 percent of the meals?”

“That’s not housework, though,” he said.

“Nope. Housework is cleaning. You don’t clean that much.”

He gave me the eye.

“Okay, so I don’t do dust all that often. But I dusted our bedroom for the TV cameras. And the camera man told me that I was a good duster. I also clean the bathroom once a week, and scrub out the toilet whenever there’s mold in it. And I clean the kitchen once a week. What do you do?”

The following day, I was sitting at our dining room table, which has basically become a desk that I use to sort the mail into 6000 piles that only make sense to me (coupons pile, stuff that needs to be shredded pile, bills pile, Mark’s mail pile, etc).

“I’m sorry that I didn’t think of that as housework,” he said. “I see that it takes a lot of time.”

I hugged him. “By the way, cooking takes a lot of time, too.”

So maybe the first step in solving the housework debate centers on this difference in perception. Who does more? If you both think you do more, then one or both of you is in dire need of a reality check. But which of you needs the reality check?

So I’m curious. Who does more housework in your home? Think about that question and then ask your spouse the same question. Let me know if you and your spouse suffer from a similar difference of perception as I did with mine.

Note: My appearance on the Early Show was bumped to next week, so those of you who thought you missed it really did not. I believe it’s supposed to run on Tuesday, but I’ll post an update closer to the air date.

What to do about a passive aggressive spouse

A Primer on Tone of Voice

5 ways to affair-proof your marriage