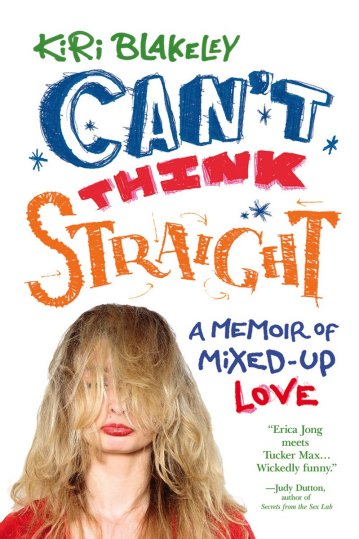 Apparently Kiri Blakeley and I were destined to become friends. Kiri used to write regularly for Forbes Woman. One day, about a year ago, my phone rang. I picked it up. It was Kiri. She interviewed me about something or other. I think it was a story about celebrities and how they suck at staying married.

Something like that. Then almost as soon as I was on the phone with Kiri, I was off it. That’s how things generally go with reporters, I’ve found.

A few months later, I met Jonathan Alpert, a Manhattan psychotherapist, at a TV station. We were both there to talk about Tiger Woods. Somehow one thing led to another and he told me about this woman that he thought I should meet. It was Kiri.

Kiri and I decided to make the best of this peculiar situation. I sent her my book. She sent me hers. We agreed that I would blurb her book. She would blurb mine.

Anyway, as I read Kiri’s book, a few thoughts occurred to me.

Thought #1: Dang, this girl is brave. I sweated over the one sex scene in my book and about whether it would be okay to use the phrase “went down on” when referring to something I did with my husband. Kiri proved to me that I had nothing to worry about. More important, she proved to me that one could write about having sex in a very detailed way with very detailed words and still look you in the eye the next morning.

Thought #3: I never want to be single ever again. And if, for some freak reason, I become single, I am not going to date. I’ll just become a nun or something, even though I’m not Catholic.

This last thought is the reason I’ve decided to include Can’t Think Straight in the Marriage Books You’ll Love series. Can’t Think Straight tells the story of the year Kiri spent recovering from the news that her fiance and boyfriend of 10 years was gay. That’s right. The guy she was about to marry—the guy that she thought was perfect for her in every way—one night said, “Honey we need to talk.” That conversation ended with her realizing that her boyfriend was not attracted to her because he was attracted to hairy men instead. (Watch this video of Kiri reading the first chapter of the book for all of the details of how he came out).

After that split, Kiri spent a year rediscovering her sexuality. She went on a wild dating spree—the kind that my unhappily married mind fantasized about quite often.

Apparently, this isn’t the case. Or, at least, it’s not the case in Brooklyn. Now, let me tell you something. Kiri is drop dead gorgeous. And she, at that time, was working an enviable job at Forbes magazine. She was quite the catch by anyone’s standards.

Yet, the guys she dated were just, in a word, ugh. Slimy. Upsetting. Sorry excuses for men is what they were.

Kiri somehow found every sorry excuse for a man in New York, and she dated every single one of them.

I’m not going to spoil the ending. I will only say that she did learn a few things about herself and about men during that year.

And I’m going to say this: thank God I’m married.

I’m going to make my husband a happy man tonight. How about you?

Next up in the Marriage Books You’ll Love series: Fits, Starts and Matters of the Heart.

Note: At 2 pm EST Tuesday Dec. 7th, I’ll be on FoxNews.com Live with Courtney Friel to talk about Project: Happily Ever After.

Learn more about Project: Happily Ever After. Watch the trailer and get a sneak preview into the book.