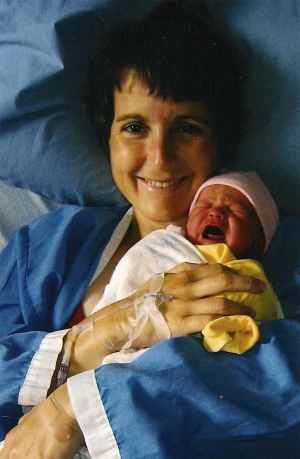 I grew up knowing the story of my maternal grandmother and how, not long after her second baby was born, she turned on the gas and tried to kill herself.

I also grew up knowing the story of my mother, about how, not long after my birth, she was driving one day and thought, “I should just drive the car off that bridge and get it over with.” Then her milk let down and she thought, “Okay, I’ll nurse her, and then I’ll kill myself.” Then something else happened to occupy her attention, so she told herself she would take care of that, and then she would kill herself.

The story became known as the day my mother could not find the time to kill herself.

At that time, I didn’t know I had a history because I didn’t understand what post partum depression was. Had the form asked me whether any of the women in my family had attempted suicide after birthing a baby, I would have answered, “Yes.”

But no one asked me that question.

So, despite the fact that I am a health writer, it never occurred to me that I was at a higher risk of getting this disease. And when I suffered hot flashes after my baby was born, I blamed it on fluctuating hormone levels. And when the rage erupted–causing me to scream at my husband, the dog, my mother, and yes, even my own baby—I blamed it on sleep deprivation.

And when I came so close to shaking the life out of my baby one night because of that rage, I blamed it on displaced anger. The person I really wanted to shake was my husband—because he was sleeping peacefully and I wasn’t.

And by the time I was fantasizing about driving my car into telephone poles, I just wasn’t thinking much of anything. The ability to suss out normal from abnormal? I no longer possessed that.

It wasn’t until years later, when I was reading a book called The Female Brain that I finally realized what had been wrong with me. The book’s author described post partum depression in a way that gave me pause, because it was as if she were describing me.

Discovery Health Channel will air a documentary next week about this important topic. It’s called Post Partum Nightmares, and I’m one of the women interviewed.

When I learned that the documentary was airing next week, my first sensation was one of embarrassment. I thought, “Oh my God, now every single person in the United States is going to know that I am a bad mother.”

Yes, that was my first thought. Indeed, post partum depression leaves behind a sense of shame and failure that can be quite hard to overcome. Until I had a baby, I’d experienced nothing but success. Then, I had a baby and I felt like a failure. I had no idea what I was supposed to do with a baby all day long. I didn’t know what my baby wanted when she cried. And, some of the time, I just didn’t want my baby anymore.

How could I admit that to anyone? I felt so shameful about those feelings.

But that’s precisely why I agreed to participate in the documentary, why I’m blogging about it today, and why I’m planning on giving a presentation about it to a large regional hospital. It’s my hope that the show will start an open discussion among women and their doctors. It’s my hope that it will help mothers shed their own feelings of shame and inadequacy.

Because if you’ve been through this, I can tell you: you are not a bad mother. You are not a pariah. You are not a failure or a weak person. You have or had a disease, one that should have been diagnosed and treated.

Twenty percent of new mothers suffer from this disease. Think about that stat. That’s one in every five mothers. I suppose that stat does not include the countless women who — like me and like my mother and like my grandmother – were never diagnosed.

Second, I think we, as women, can help new mothers. Rather than putting them through the Baby Olympics (Is your baby sleeping through the night? Is your baby rolling over? Is your baby crawling yet? Is your baby talking yet?), why don’t we just compliment them? Why don’t we do something helpful, such as dropping off a week’s supply of frozen dinners or hiring them a cleaning service? Why don’t we talk about our own experiences? Why don’t we say things like, “Early motherhood was one of the hardest stages of my entire life. There were times when I wasn’t sure I was going to live through it. Honestly, I felt like such a failure. How are things going for you?”

I don’t know for sure that such things would solve the problem, but I think they would definitely help. What do you think?

How to stop fighting about dirty clothes

9 stages of an unhappy marriage